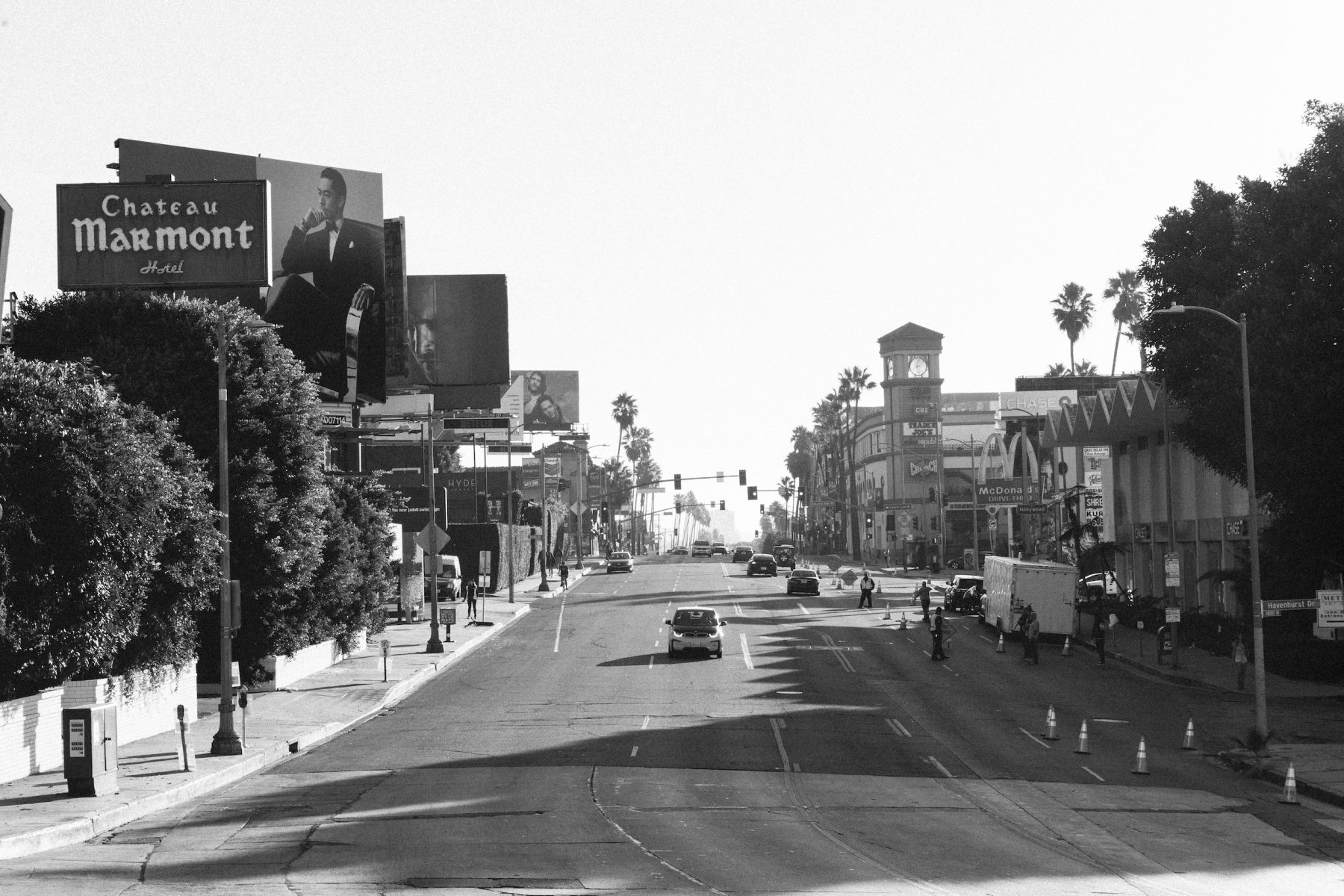 If you want to be a better photographer, stand in front of more interesting stuff.

This dictum from veteran National Geographic photographer - Jim Richardson - is perhaps one of the most simple and helpful of all celebrated instructives in photography and yet it is so often forgotten and seldom applied. Perhaps its very simplicity hampers its route through our cognitive filters.

A camera is just a piece of metal and its role in photography is confined to capturing a split second of a visual in front of it. Of course, some cameras are better equipped to do that than others and some practitioners are better operators than others, but in the main, the subject matter is the key determinant of a photograph’s strength. I believe this rule to be largely genre agnostic - it is true of landscape photography, sport, fashion and indeed the female form.

Our global tour reaches Amsterdam next week after shows in Oslo, London, Monaco, Vancouver and LA. We have been flattered by the footfall and level of interest and certainly being on the gallery road focuses the mind on what we must do better when we return to the field. There is no better market research than speaking to visitors of our shows and we are a sponge to the considered opinion of others. There are gaps in the tour schedule that have deliberately allowed us to work on concepts and garner new material.

I think we work better when in a show period as we are even more conscious of the process required to engage an audience than usual. The back end of our business bends back to influence the front end in a way that hints at consumer sovereignty. We know what does not sell and we know what does - it would be commercial suicide not to allow that to influence our project decision making.

This approach can be criticised as there is a calculating nature to our work and with it a lack of spontaneity. But I have always maintained that we make pictures rather than take them and that in itself suggests a weighting towards preparation and preconception. That is pivotal to our approach and we will not budge. Jim Richardson was emphatically right - the more “interesting stuff” works.

The days of just hopping off to East Africa and seeing what happens are long behind us. And the Henry Ford days of saying “we will give you any colour as long as it’s black” are done in 2019. I make no apologies for being acutely focused on what appeals. My beloved mother was a truly exceptional artist, but at the end of her storied life she acknowledged humbly that she produced work that had a limited marketplace. Subconsciously and consciously that has had a material impact on me when deciding what to photograph.

It is very clear to me that we must invest ever more aggressively in content to retain the brand’s position and we must do this with confidence and courage. If, for instance, we are going to use a horse in an image, let’s make sure it is a beautiful horse and if we are going to work with models, let us also invest in the very best and not compromise on quality. I am both a romanticist and a perfectionist and I think our portfolio of notable work has been upgraded materially in 2019. In staged content, it is difficult to argue with the rule that “you get what you pay for”.

Three years ago, we were working with models with a daily rate of £2,000 but now we will try to book the best girls in the world. For instance, the series we shot last week on Sunset Boulevard, in Los Angeles was led by Alessandra Ambrosio - the most celebrated Victoria’s Secret model of the last 10 years. Alessandra’s involvement in any production comes at a cost and rightly so.

We may have some skills in the field, but that alone will not determine our path from here, it will be the degree to which we reinvest the cash flow from recent successes. If our European galleries are strong enough to sell over 200 of our limited edition prints in the six short weeks since the tour began - now is the time to double up, not sit back and take a break.

We have studied the Netflix model carefully and whilst we accept that there are few similarities at the distribution level, given the respective price points, there are some prompts in Netflix’s spend on original content.

This newsletter focuses on two projects that have been undertaken recently at considerable cost. The first was a recreation of The Lion King in East Africa and South Africa which received strong press coverage in the UK and the second was a recreation of the frenzied dealing room scenes from The Wolf of Wall Street which we shot in California. The two projects cost a combined £200,000 - a drop in the ocean compared to the £6m Netflix spent on each episode of The Crown, but certainly high for a photographer hoping to get just one still image of a snapshot in time, not 50 minutes of film.

In 1985, I used to queue overnight in the line at Wimbledon to gain access to the corner spot of the standing room area at Centre Court. It was nearly as good as being courtside - especially for a 19-year-old. I would watch the heroes of the day do battle - McEnroe, Connors, Cash and Lendl and then print out my pictures and sell them outside Southfields Tube station 48 hours later. It was a long 72-hour round circle that normally ended up with me booked for illegal street trading. My pictures sold for £20 each.

34 years on and some of my work is now reaching six figures – it’s been a long journey with the most modest of beginnings. It is those beginnings that I cling to in an era in which everyone is a photographer and where good things tend to take time. I remain as determined and conscious of my own fallibility as I was when I ran through the gates of Wimbledon at 11am as a 19-year-old. It’s an overused cliché, but there is truth in my fear that I am only as good as my last job. 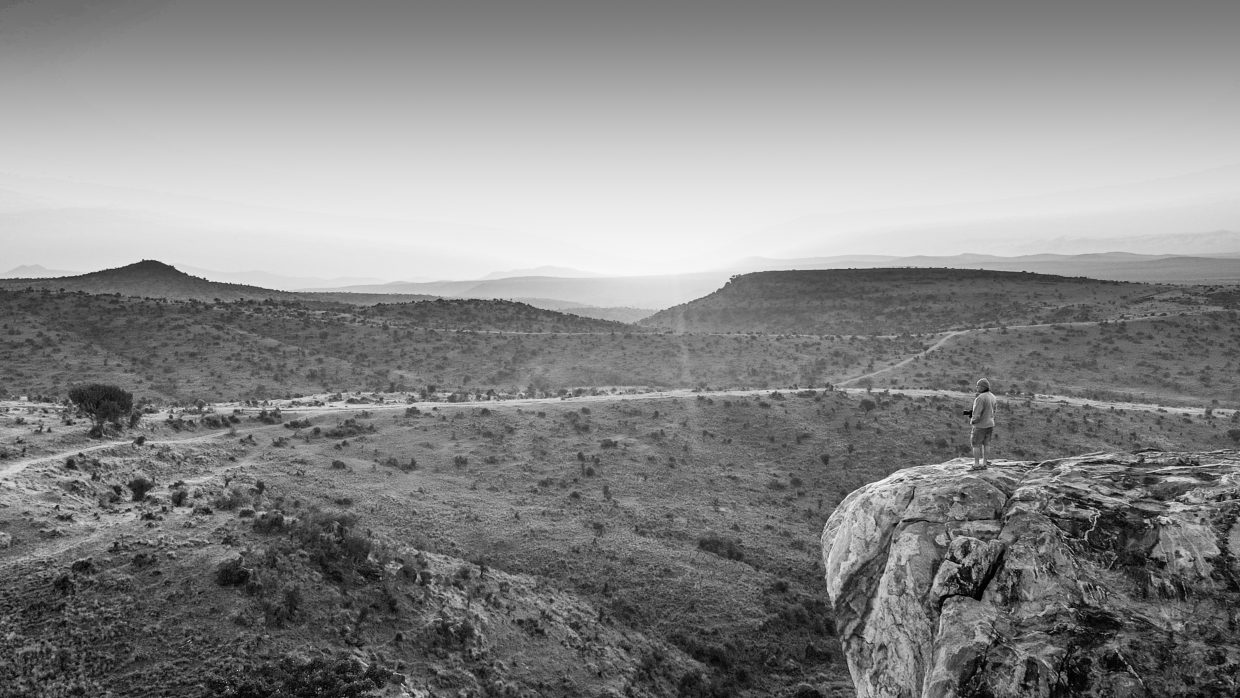 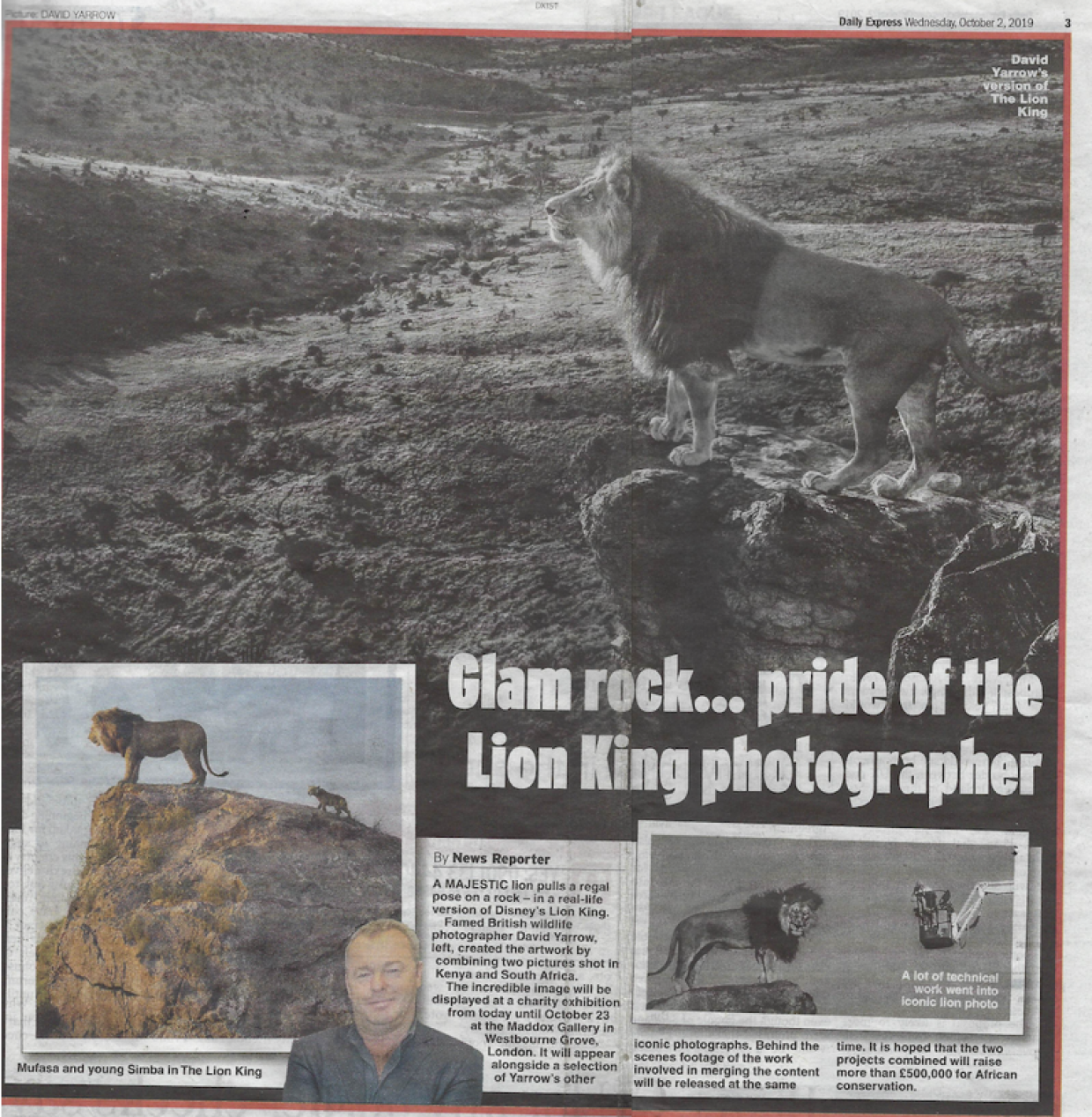 The Lion King project was inspired not so much by Disney’s 2019 remake, but the length of time one of their divisional teams spent around Pride Rock in Kenya recording light and line. It shows a level of attention to real detail in an animated film that is humbling and offers an insight into why the film cost $250m to make. We knew that lions have probably never ventured on to Pride Rock as suggested in the film’s campaign poster, but we also knew, given our relationship with Kevin Richardson in South Africa, that we could perhaps photograph a lion on a replica of Pride Rock. Our relationship with the Dyer family in Borana, Kenya also opened doors for us in photographing Pride Rock at sunrise, in the very same way that Disney had done.

The composite that we finished with will hopefully, over time, raise over $500,000 for lion conservation. We did a good job over that week in two locations 4,000 km apart - the integrity of the shadow detail and angle of view was a reminder to the team that whilst photography is about the heart and soul, it is also occasionally about access and mathematics. There was a precision involved that had nothing to do with emotional intelligence and everything to do with accurate measurement.

Kevin Richardson is a genius and I am proud to partner with him on this project and to be an ambassador to his foundation. In order for the idea to work he had to get one of his lions on a manmade rock around 40 minutes after sunrise and then look head up into the distance. That would be an impossible job for anyone else in the world and even for him, it was a challenge. It’s tough when your filming day is over at 7.45 am and you have exactly nothing in the can. That was why we were always going to need a few days to get an image. 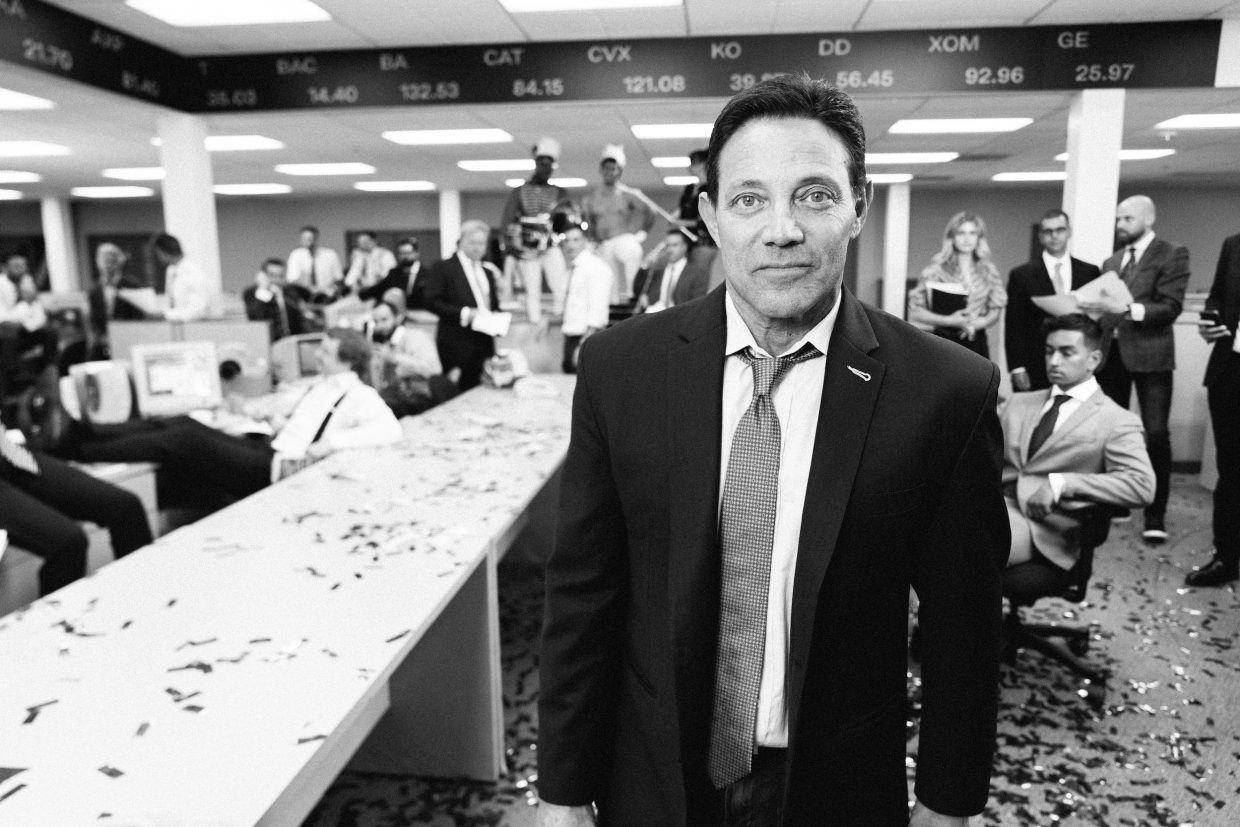 The Wolf of Wall Street project was an ambitious and important one for me as Martin Scorsese is one of my heroes. He has an innate ability to frame and I studied the dealing room scenes from the film over and over again. His framing is tight and always shows an intuitive understanding of light and line. His films such as Goodfellas and The Departed offer a masterclass in camerawork.

Scorsese was apparently reluctant to meet Jordan Belfort - the real Wolf of Wall Street but I needed him as I needed his approval for the job and over the summer I enjoyed several dinners with him in LA. It was clear to me that I should try and include him in the photograph not only as he had a face and a character that begged attention, but also because he is integral to the story we were telling. To include him was a commercial risk, no doubt, but I felt that he could play well to the camera. He has no difficulty being himself and he is certainly “high” - albeit these days, on energy alone.

I knew that in order for my project to work, every inch of our frame had to earn its place and equally there had to be enough depth to accommodate a layered narrative. That was not easy inside a disused office space that would have limited depth of field and therefore the background characters would be increasingly abstract.

These types of photographs require a precision and a fluency in the language of wide angle lenses. The 28mm prime lens has always been my go-to in situations like this - it offers crisp results in the foreground so long as the focus is pin sharp - one inch the wrong way can make all the difference. Furthermore, it offers so much room for context in the background and a chance of some degree of detail.

But I had one approval that mattered more than any other - that of Leonardo DiCaprio. I sent the completed file to him with a degree of hesitancy, but almost immediately he replied with lavish praise and I was fortunate to meet up with him privately the next day.

He thought the image captured the “very essence of Jordan Belfort”. It was a career highlight to get that kind of affirmation from the greatest actor of my generation. This image on pages 10 and 11 will be shown for the first time in Dallas and Chicago next month and then at Art Miami - where I have no doubt that it will create quite a stir.

When I look back over our working year, these two projects have given us a huge boost and we want to thank all those who have helped. It has given us momentum going into 2020 and we will continue to try and push creative boundaries.

We hope to see many old friends in Dallas, Chicago and Miami in the weeks ahead. 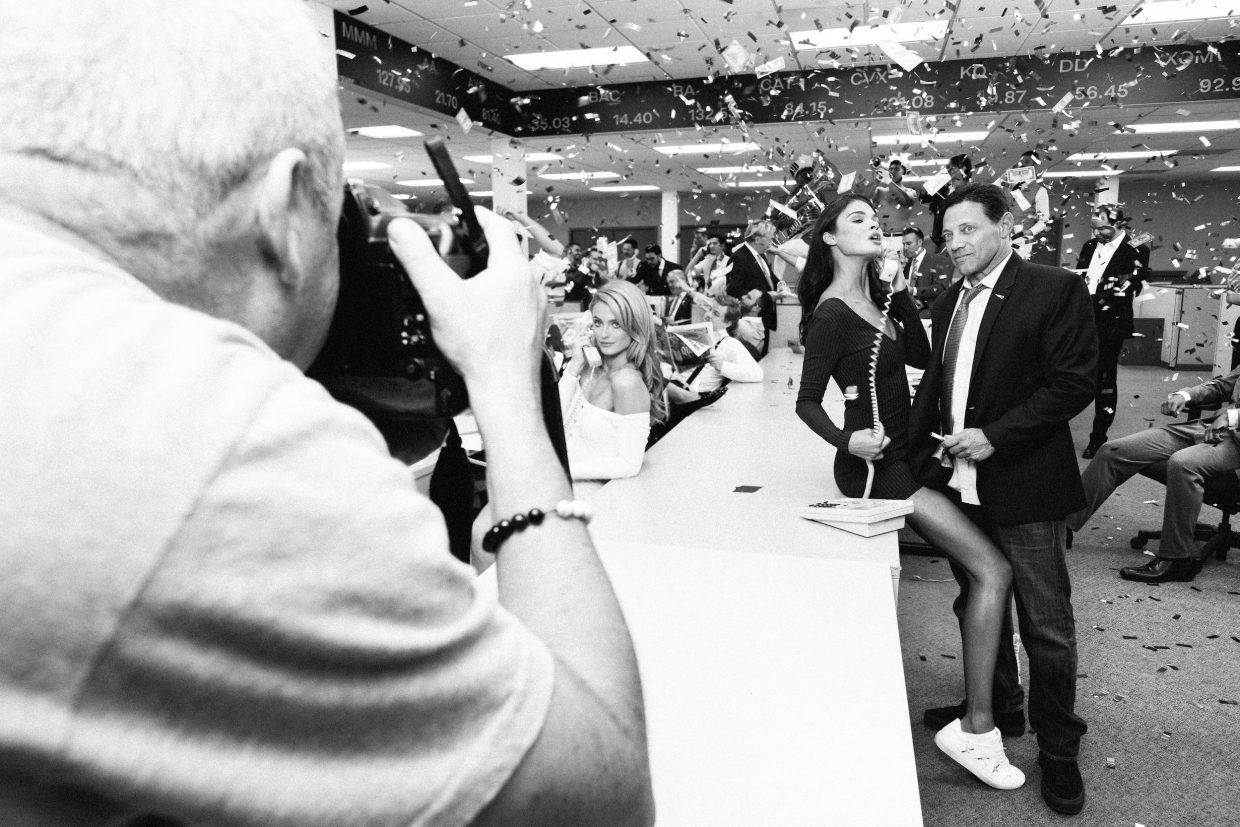